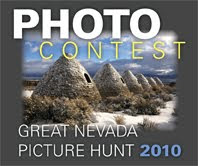 For more than three decades, Nevada Magazine’s Great Nevada Picture Hunt photo contest has been a favorite among readers. One Grand Prize winner in this year’s contest will receive $250 and a Lake Tahoe helicopter tour courtesy of HeliTahoe. Five category winners (City Limits, Wide Open, Events, People, and Adventure) will each receive $100. Send photo submissions, preferably via e-mail, to tony@nevadamagazine.com by 5 p.m. (PST) on Friday, June 11, 2010. If you need to mail your images, call 775-687-0606 for instructions. To view past contest winners, or for more details on the contest, click here.

Nevada Magazine also recently switched subscription service providers to Minnesota-based PMG Data Services. “We are happy to announce our new association with PMG,” says publisher Janet M. Geary. “This company will be handling all the circulation needs for our readers.” Now, ordering a subscription via nevadamagazine.com is easier than ever. Soon, customers will be able to change their address, check their renewal status, and get their questions answered online. 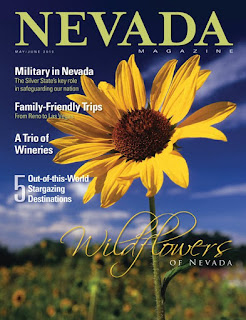 In the May/June 2010 issue (shown at left), available on newsstands, we explore Nevada’s softer side, with a photo feature on the state’s wildflowers and a guide to stargazing around the Silver State. A story about family-friendly attractions in and around Las Vegas and Reno provides readers with options that will keep the kids entertained, and our events-themed Spotlight covers a number of family-friendly outings to plan for this spring and summer.

A story about Nevada’s trio of wineries is perfect for when mom and dad need a break from the kids. Not to ignore Nevada’s rugged side, this issue’s History story recaps the famous 1910 Jack Johnson-James Jeffries heavyweight boxing match in Reno. The other feature highlights the state’s little-known military operations in Fallon, Hawthorne, and Las Vegas. Finally, the magazine’s Tour Around Nevada continues in the southeastern border town of Mesquite. 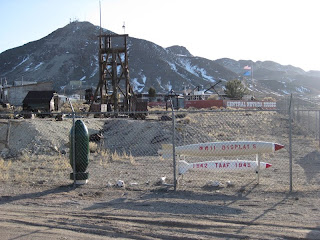 I arrived in Tonopah on a windy and cool March afternoon and, after checking into my hotel, headed directly to the Central Nevada Museum.

The museum sets back from the main road, and, as I turned into the facility, I was greeted by three World War II bombs displayed in front of the museum yard. This included the “Guide Bomb” that was tested in secrecy during the war. Further back toward the main building, the yard was full of old mining equipment, ore cars, and other early 20th- Century machinery.

As I entered the museum, there were walls of old photos and glass-encased displays filled with old typewriters, telephones, rifles, etc.—directly out of the Old West. Old sepia photographs, era uniforms, and clothing worn during the height of the big silver strike in the early 1900s lined the walls.

I roamed through the displays until I found the Tonopah Army Airfield display tucked in the back of the building. After a brief review of the display, I worked my way back to the front and found the museum researcher, Angela Haag. I told her of my interest in writing a story about the airfield, and Angela, without hesitation, opened up her knowledge and understanding of the airfield’s history.

Since it was near closing time, I feared we would not be able to cover much during the visit. However, no clock-watchers here! Angela not only shared her knowledge but also surprised me with a DVD about the airfield and more specifically, the testing of the Guide Bomb (forerunner to the 21st-Century Smart Bomb) and, in addition, shared an autographed photo of Amelia Earhart (see below) that was given to an aviatrix friend that lived in Tonopah at the time. 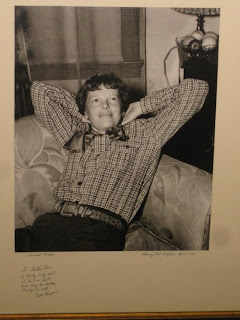 I could have stayed longer conversing with Angela, but time was not on my side. Before leaving, she suggested I contact Allen Metscher, President of the Central Nevada Historical Society and the specialist in Aircraft Accident Research Archaeology & History for the airfield.

After returning to my home in Phoenix, I contacted Allen, and we had a spirited conversation regarding the airfield, its contribution to the war effort, and, most interesting, the number of young airmen killed during training—110—mostly from P-39 and B-24 training flights.

I cannot say enough about the quality of the museum and Angela and Allen’s helpfulness. They are eager to share their knowledge. You will feel at home immediately when walking through the museum doors. If you have any interest in the Tonopah area’s history, stop in and pay them a visit. You will not be disappointed.
Posted by Nevada Magazine at 3:41 PM 1 comment: