The Goldfield Historical Society recently dedicated and placed a plaque on the headframe next to the Santa Fe Saloon and Motel. The plaque reads as follows:

An original headframe from the Combination Mine, on the Combination No. 1 claim, located  by Alva D. Myers and R.C. Hart on May 26, 1903. In 1989, it was moved to this location from approximately 1/4 mile east, in the Goldfield Mining District, by the Red Rock Mining Co. 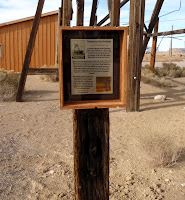 Gold was discovered approximately two miles north by Harry Stimler and William Marsh in December 1902. This created much excitement, and a rush to stake the first claims was on. In the summer of 1903, interest in the Grandpa District (later renamed Goldfield) was waning. However, some of the original prospectors and investors refused to give up, including Myers. Subsequently, in the fall of that year, his discovery at the Combination paid off and became one of the richest ore producers in the district.The recorded production of gold from the Goldfield District for the period 1903-1960 was nearly 4.2 million ounces from about 7.7 million tons of ore. At least 98 percent of this was from an area less than a mile long and a few hundred feet wide, which included the Combination claims.

"It was a very nice ceremony, and I'm hoping the Goldfield Historical Society will be doing more of these in the future," said member Dominic Pappalardo.
Posted by Nevada Magazine at 2:12 PM