Vote in our Best of Nevada, win a trip! 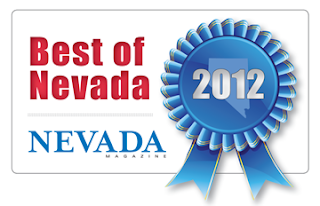 Do you have a favorite hotel, restaurant, show, or event in Nevada? How about a museum, ski resort, state park, or place to take the kids? You can cast your vote in those and more categories in Nevada Magazine's 2012 Best of Nevada survey now through April 15. Not only is it a great opportunity to support your favorite attractions and businesses, one lucky voter will win a travel package to Elko, including two nights accommodations for two at Red Lion Hotel & Casino, plus dinner at the Aspens Bar & Grill. Vote now at NevadaMagazine.com!

Nevada Magazine's current issue features a Nevada road trip and the state's prevalent motorsports scene. Last fall, Seattle photographer and brand-strategist Adam Smith spent two weeks traveling the Silver State. His assignment was to bring back stories that illustrate the soul of Nevada. Readers can enjoy photographs and entries from Smith's travel journal, including a day spent at Glaser Ranch outside Elko, ATVing on Sand Mountain, and riding the V&T Railroad.

Starting with NASCAR Weekend, held March 9-11 at Las Vegas Motor Speedway, Nevada truly is a motorsports mecca. The story includes a Q&A with NASCAR standout Kyle Busch. Eight other speedways outside Las Vegas are covered, as well as three racing organizations — SCORE, SNORE, and BITD — that are instrumental to bringing some of the world's top off-road racing events to Nevada. For example, the Mint 400 comes to Las Vegas March 23-25, popular for tech inspection at Fremont Street as much as the racing.

Also in the issue are a story about Old Middlegate Station and a proud slayer of its famous Monster Burger, how to prepare for and survive in Nevada's wilderness should a crisis occur, Carson Valley's own George Ferris Jr. who went on to invent the Ferris wheel, and a guide to the Strip's newest resort, The Cosmopolitan of Las Vegas. Learn more about the issue in the below video.