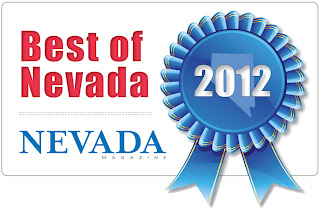 Nevada Magazine’s July/August 2012 edition, which reveals the winners of the publication’s 15th annual Best of Nevada readers’ survey, is on newsstands now. From Brewery to Wedding Venue, the annual listing includes 18 categories. In most cases, the categories are divided into North, South, and Rural Nevada, giving tourists plenty of statewide vacation ideas.

A complete list of winners can be found at nevadamagazine.com. To see past Best of Nevada winners, click here.

Best of Nevada winners Nevada Northern Railway in Ely (Best Place to Take the Kids; Rural) and Valley of Fire State Park (Best State Park; South) also were honored with the distinction of being named one of the state’s six treasures in a recent Nevada Commission on Tourism campaign called Discover Your Nevada. Like Best of Nevada, the treasures—one from each of the state’s six “territories”—were determined by public vote.

Also in the July/August issue are stories about renovations at Las Vegas’ original resort—Golden Gate Hotel & Casino—sister bed and breakfasts in Alamo, a cozy B&B in Kingston, and a history story about the July 18, 1912 flood that wiped the northwestern Nevada mining town of Mazuma off the map.
Posted by Nevada Magazine at 11:30 AM