What Are Your Nevada Bests? 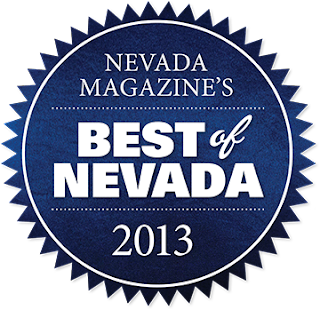 Do you have a favorite hotel, restaurant, show, or event in Nevada? How about a museum, ski resort, state park, or place to take the kids? You can cast your vote in these categories and more in Nevada Magazine's 2013 Best of Nevada survey now through Friday, April 19.

Not only is it a great opportunity to support your favorite attractions and businesses, one lucky voter will win a Reno travel package, including two nights accommodations at Eldorado Hotel Casino Reno, dinner at Roxy, show tickets at Eldorado Showroom, plus a round of golf at Wildcreek Golf Course in Sparks (all prize packages are for two people). Vote now at NevadaMagazine.com!

Nevada Magazine's current issue features two centennial celebrations — the Lincoln Highway in Nevada and the Pioneer Saloon in Goodsprings, about 40 miles southwest of Las Vegas. This year marks the 100th anniversary of the Lincoln Highway, and you can still drive on original sections of it in the Silver State. Also, towns along U.S. Highway 50 will be celebrating the centennial during select dates in June.

The Pioneer Saloon, the subject of this issue's History story, was built by Clark County commissioner George Fayle in 1913, when the mill town was enjoying its boom years. One hundred years later, the Pioneer Saloon is still standing…and still serving. It contains a Memorial Room in honor of actress Carole Lombard, who died in 1942 as a result of a plane crash on nearby Mount Potosi. Her husband, actor Clark Gable, spent time at the saloon while awaiting news of Lombard's fate.

The issue also features Nevada’s array of professional and collegiate sporting events that promise to keep residents and tourists entertained without breaking the bank — whether you’re root-root-rooting for the home team at a Las Vegas 51s or Reno Aces Triple-A baseball game, hitting the hardwood with the Reno Bighorns basketball team, or annoying everyone in earshot with your vuvuzela at a Las Vegas Legends soccer match. The story also covers hockey, bowling, collegiate sports, golf, and motorsports.

Also in the issue are stories about prospecting for gold and other minerals in Nevada, Thunder Mountain Indian Monument in Imlay, Las Vegas Distillery, Boyz II Men's new headliner show at The Mirage, and a Q&A with Reno-Sparks Convention & Visitors Authority President and CEO Chris Baum about Reno's new slogan, "All Seasons—1,000 Reasons."

Nevada Magazine is offering a free trial version of the digital edition of its current March/April 2013 issue, available here.
Posted by Nevada Magazine at 3:10 PM