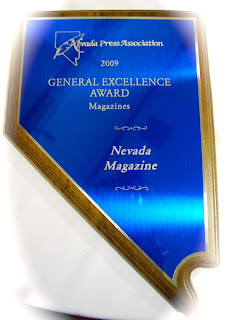 In September, Nevada Magazine had the distinct honor of winning numerous awards from the Nevada Press Association, the formal trade organization for the state newspaper industry. This was the first year the NPA included magazines in its annual awards competition.

It was very rewarding for us to be recognized by our peers. “Excellent in every area. Diverse and informative stories, beautiful photography, impeccable design, wonderful variety of advertising. Has it all!” read the NPA judges’ comments in reference to the General Excellence designation. On September 12, most of our staff traveled to Winnemucca for the awards dinner.

The NPA awards were a nice follow-up to a few other prestigious accolades we’ve received recently. In 2008, we were honored with two Gold awards — Most Improved Magazine and Photographic Series — in the 28th annual International Regional Magazine Association contest. Earlier that year, NevadaMagazine.com won a Grand Award in the 20th annual APEX competition and earned the top spot in the Magazine Affiliated Online Journalism division of the National Headliner Awards, one of the oldest and largest annual contests recognizing journalistic merit in the communications industry.
Posted by Nevada Magazine at 12:13 PM