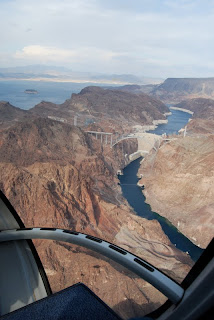 Over the weekend, Associate Editor Charlie Johnston and I were treated to a 15-minute Hoover Dam Helicopter Tour, courtesy of Look! Tours and Stars and Stripes Air Tours.

We arrived at the Stars and Stripes heliport (1251 Airport Road) before 1 p.m. After a short delay, due to some feisty winds, we were soon up in the air and in the capable hands of pilot Curtis Cornelius (see photo below).

This was my first helicopter flight, so I was excited. I had never seen Hoover Dam before, so it was easy for me to be amazed at the dam, the new Hoover Dam Bypass (currently under construction), and the Colorado River, which from a bird's-eye view is strikingly green due to the lime in the surrounding rocks.

What surprised me, however, was the unique formations that define the land around Black Canyon and Hoover Dam. The earth juts up in tinges of brown, red, and green, and the mountains appear at a glance to be carved out of rock. It's all the more impressive after flying over a vast, flat expanse of dirt and sagebrush in approaching the dam from the airport.

It was also quite the view to see Boulder City Golf Course such a nice shade of dark green, even in February. For such a short flight, the variance in scenery tricks you into thinking you were in the air a lot longer. Watch a video about the experience here.

Look for a story on Las Vegas tour companies in an upcoming issue of Nevada Magazine. If you're skeptical of the hovering variety, don't worry, we'll offer some suggestions that will keep you on the ground. 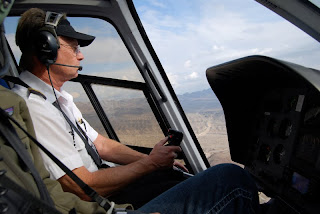 Posted by Nevada Magazine at 10:32 PM