Results will be published in the July/August 2010 issue and on NevadaMagazine.com in late June. “We encourage everyone to go to our Web site and vote for their favorites, including in our small towns and rural areas,” says Publisher Janet Geary.

To vote, visit the NevadaMagazine.com homepage and click on the Best of Nevada 2010 logo, or just click here to get started. The categories are divided into three parts: Northern, Southern, and Rural Nevada. You do not need to fill out all the categories to submit your survey. However, two lucky voters out of those who complete their ballots will win complimentary two-night stays at Eldorado in Reno or The Venetian/The Palazzo in Las Vegas. Voting ends on Thursday, April 15.

The 2008 and 2009 Best of Nevada winners can be viewed at NevadaMagazine.com. 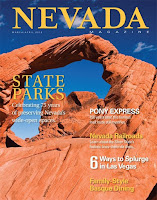 Nevada Magazine’s March/April 2010 issue hits newsstands in late February. In it are features on the 75th anniversary of Nevada’s state parks and the Pony Express sesquicentennial—150 years ago riders saddled up to deliver mail via the historic trail, crossing Nevada between Sacramento and Missouri.

To vote in Nevada Magazine’s Tour Around Nevada, click here.

Posted by Nevada Magazine at 12:55 PM