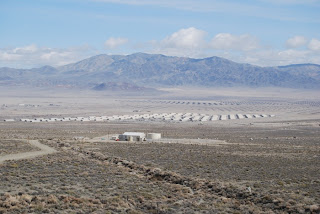 One of the great things about being a journalist is that you get to live vicariously through so many fascinating people and their careers. A prime example of that was my recent tour of Hawthorne Army Depot in western Nevada.

While they weren't about to let me test the latest in U.S. rocket-launching technology, I did get a comprehensive tour and overview of the various activities that occur at HWAD (Hawthorne Will Always Deliver).

The itinerary included an overview briefing with the commander, a drive-by tour of the long-term and short-term housing, a look at the Depot's new Groundwater Treatment Plant, a windshield tour of the WADF (Western Area Demilitarization) area, and a bird's-eye view of the terrain that has been utilized to train troops being deployed to Afghanistan.

But the most interesting part of the day was the visit to mini-Kabul, if you will. The Depot has built a small simulation of a typical Afghanistan city/town (see photo below), which troops use to train in. The buildings are somewhat sophisticated, with multiple levels, doors, and windows and dummies meant to represent opposing soldiers. It's surreal to be among these training grounds at their most peaceful, and then to imagine a day later they could be buzzing with training soldiers.

Although we did not get to see the site, the Depot is also in the process of testing geothermal wells. The goal is to have a fully operational plant by 2012.

Story & photos by Matthew B. Brown 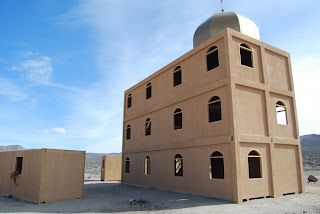 Posted by Nevada Magazine at 1:42 PM