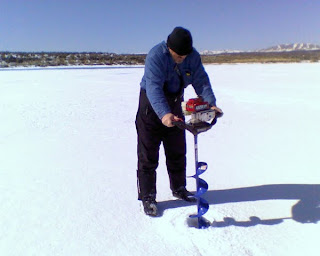 Sitting and fishing through a hole drilled in the ice was once a concept that failed to interest me. Five years of appeals from my friend in Elko did not persuade me. “It’s not like you think,” he’d say from time to time, going on to describe the pleasures of ice fishing at South Fork Reservoir. In spite of his enthusiastic endorsements, he might as well have invited me to play golf in the snow.

He finally prevailed by linking the idea with his 50th birthday, making an ice-fishing foray part of the festivities. We had been friends so long that I could not say no, and I soon found myself on a frigid February day, bumping along the lakeside dirt road, rock hard except for the low-lying mud holes we mushed through in four-wheel drive.

Now standing on shore in a borrowed snowmobile suit and thick-soled boots, I scan a surface wind riffled and blue just months ago, now frozen flat, dazzling white, and who knows how thick. Or thin.

I venture onto this layer of frozen water, feeling secure only because my heavier friend precedes me. The auger turns relentlessly—scraping, boring, bearing down, drawing ice up in a pile around the pending hole like fence-post dirt, but white. Finally piercing the last icy inch, frigid water bursts up gushing, clinging, riding the still churning auger.

And now, another piercing: a night crawler poked through and threaded onto a fishhook. Lowered into the water on a small rod and reel held steady in a PVC pipe frame, he dangles. And we wait. With a slotted spoon we take turns clearing the hole of the ice crust forming relentlessly on the exposed dark water.

Far above the twinkling snow, the sky so cloudless, the air so clear, the Ruby Mountains stand so perfect in their form that I gaze again and again, almost in disbelief. Bald eagles perch in a far away tree. A hawk soars. Canadian geese fly by on the strength of whooshing wings.

Below me, an eerie groan, then a cracking sound so ominous that heard atop any other surface would have sent me scrambling for firmer footing. Thickening and growing, but crowded and constricted by the lakeshore, with no place to go the ice splits somewhere. Following lines of least resistance the crack moves with startling speed toward us, then shoots beneath like a runaway train, but the ice does not give way.

Captivated by the unforeseen—stunning beauty above and ominous sounds below—the squirming night crawler suspended under the ice is the last thing on my mind. My friend notes a quivering in the slender tip of one tiny ice-fishing rod, more definitive than wind would bring. The rod begins to bow, tremble and shake, its holder quivering, rattling against the ice.

Due to my distracted lapse in vigilance, it would serve me right if the fish succeeded in hauling the whole rig into the hole, but I sprint toward it sliding like a kid into third base and pounce on the rod. The fish appears—about 20 inches of silver-flashing fury—detectable in frantic snatches through an eight-inch porthole in the ice.

He surges and runs again and again, eventually tiring, but still resisting. Eventually I hoist him through the 18-inch lid on the lake. Taking my gloves off to remove the hook my exposed hands feel the bitter cold.

Seated on ice in lawn chairs, when we’re not talking, it’s immensely quiet out here, but for the ice cracking and the almost-undetectable clatter of snow grains breezing across the ice’s blanket of snow. In the south, coyotes begin to howl. From the west, coyotes answer.

The fading sun enhances the cold. The chill shocks my face when I dare turn into the breeze. Eventually, my feet, though encased in layers of wool and thick boots, relay their message: it’s time to consider heading for shore and the shelter of the truck.

We gather our gear and fish into a makeshift sled—a large plastic bin bolted to garage-sale skis cut to fit, it slides deftly over the snow as we tow it behind us. Near the shore the ice has thawed only slightly but gives way beneath, dropping me a half-inch or so to the mucky bottom.

One step more, onto dry ground with the firm earth under my feet, it’s all good, an amazing—sometimes spooky—experience. I’d come again. Peeling off my thermal jumpsuit and feeling the jolting cold again, I pull myself up into the truck. Closing the door brings a sense of delight and satisfaction—like I had gotten away with something. 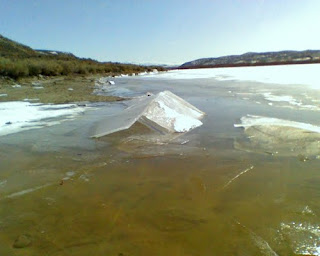 Posted by Nevada Magazine at 12:29 PM