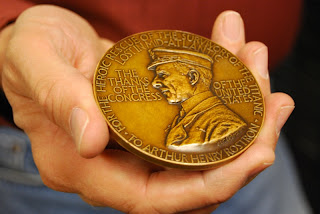 Many such medals and numerous other commemorative and honorary medallions start their journeys at Medallic Art Company and Northwest Territorial Mint in Dayton, the largest private mint in the country. A marathoner myself, I never considered the journey these baubles made to reach me; that is, until I had the chance to tour the mint recently.

Medallions, medals, coins, and the like start as ideas, which can vary from concepts, photos, and rough sketches to finished artwork. Medallic’s in-house artists take clients’ concepts and adapt them to work on the faces of a product.

First, a plaster model roughly three to four times the size of the finished product is made. From that an inverse of the model, called a die shell, is created. Die shells, which are still three to four times larger than the final medallion or coin, are then put onto special machines that reduce their size to create a die used to press the actual product. Coin and medallion blanks—such as the silver ones that are melted, poured, and formed onsite—are then pressed into form with up to 600 tons of pressure. Depending on their design, some coins and medallions have to be pressed, heated, and pressed again up to 12 times.

Some products are ready to be sent to the customer after the pressing is done, but for many, a series of treatments stand between them and their eager recipients. To give a medal or coin the appearance of higher relief, it is tarnished and then polished, leaving dark stain in the recesses while the raised parts are brought to a glossy shine. This process involves sandblasting, chemical baths, and detailed hand polishing. Although this is the final step for many of Medallic’s products, some receive a final treatment with the application of detailed colored enamels, all hand-painted by expert artists.

Born in the early 1900s in New York City, Medallic Art Company owes it existence to brothers Henri and Felix Weil and the reduction machine they brought from their native France. At the time, metal ornaments in the U.S. were typically cast (the earliest incarnation of Medallic was concerned primarily with creating trinkets to accent ladies’ purses), a process that did not lend itself to great detail in the art.

It was not until 1907 that the company made its first foray into medallions when the company was commissioned to create a medallion commemorating the centennial of Henry Wadsworth Longfellow’s birth.

The company would continue to grow in business and reputation through several moves and changes in ownership—including a merger with the Northwest Territorial Mint—until July 2009 when it moved to Dayton. Today, Medallic is Dayton’s largest private employer with more than 150 people on the payroll and room to grow. 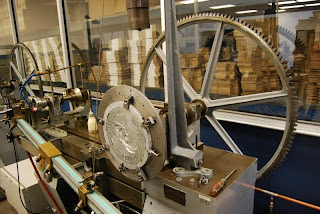 Posted by Nevada Magazine at 8:04 AM