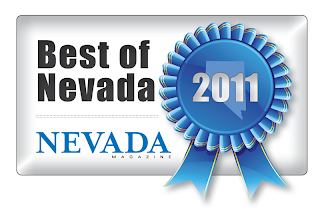 Nevada Magazine’s annual Best of Nevada readers’ poll is now available online at nevadamagazine.com. The 14th annual poll allows readers to weigh in on categories ranging from Best Casino, Restaurant, and Show to Best Place to Take the Kids.

Results will be published in the July/August 2011 issue and on nevadamagazine.com in mid-June. “We encourage everyone to go to our website and vote for their favorites, in Las Vegas, Reno, and our small towns and rural areas,” says Publisher Janet Geary.

To vote, visit the nevadamagazine.com homepage and click on the Best of Nevada 2011 link. You do not need to fill out all the categories to submit your survey. However, two lucky voters who complete their ballots will win a complimentary Nevada-themed book package and first-season “Bonanza” DVD set. Voting ends on Friday, April 15.

The 2008 through 2010 Best of Nevada winners can be viewed at nevadamagazine.com. 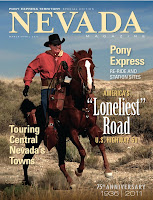 Nevada Magazine’s March/April issue — the Pony Express Territory Special Edition — is now available on newsstands throughout Nevada. In it are features on “The Loneliest Road in America” (U.S. Highway 50) and a roundup of central Nevada towns. Also highlighted are central Nevada’s parks and recreation areas, off-the-beaten-path destinations, noteworthy events, and a history story about Kennecott Copper Corporation, which was headquartered in McGill for many years.

Posted by Nevada Magazine at 9:32 AM