Nevada Magazine’s July/August 2011 issue is available on newsstands throughout Nevada. The Indian Territory Special Edition highlights the state’s 27 federally recognized tribes and the colonies, reservations, and towns they call home.

Included in the issue is a feature on American Indians in Nevada who are working diligently to keep their native traditions — such as ancient hunting techniques and centuries-old languages — alive. A piece on rock art, technically known as petroglyphs and pictographs, explores the significance of these ancient markings and where in the state they can be viewed.

The issue also contains a special yearlong Indian events listing and a story about the beautiful and inspirational native celebrations called powwows, or fandangos. Finally, the issue looks back on the life of famous historical figure Sarah Winnemucca, and additional stories — including fishing at Pyramid Lake and Fernley’s Wigwam Native American Museum — can be found online at nevadamagazine.com. 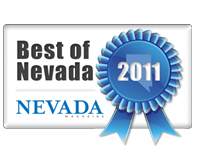 Also in the July/August 2011 edition, the winners of the 14th Annual Best of Nevada readers’ survey are revealed. From Brewery to Wedding Venue, the anticipated annual listing includes 16 categories. In most cases, the winners are divided into North, South, and Rural, giving tourists plenty of statewide vacation ideas. The list of winners can also be found online at nevadamagazine.com.
Posted by Nevada Magazine at 1:40 PM