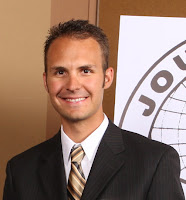 Matthew B. Brown, editor of Nevada Magazine, has been named to FOLIO: Magazine’s 2011 FOLIO: 40, the company’s yearly “list of some of the most distinguished magazine and media professionals from every corner of our industry.”

Brown, in his fourth year as editor of Nevada’s official tourism publication, is featured in the April 2011 edition of FOLIO: and on foliomag.com. The 29-year-old guides the production of the bimonthly publication, but his prowess for marketing Nevada Magazine via social media, e-newsletters, and nevadamagazine.com garnered special attention from FOLIO:.

“I think the modern editor has to operate in multiple dimensions today — and that’s posting an amazing picture on Flickr from an upcoming article, or an informative posting on Twitter or Facebook to drive traffic to your website, and then making your website look and read as well as your print magazine does,” Brown says in the FOLIO: 40 article.

Nevada Magazine is a division of the Nevada Commission on Tourism (NCOT).

“Nevada Magazine plays an important role in our tourism marketing efforts, and Matt has done a great job as its editor,” says Lt. Gov. Brian K. Krolicki, chair of NCOT. “Matt’s focus on social media has ensured that the magazine utilizes current trends effectively and reaches an even greater audience.”

“It is gratifying to see the dedication and talent of Matt Brown recognized on a national level,” says Larry Friedman, interim director of NCOT. “He makes Nevada Magazine and Nevada proud.”

Since Brown took over as editor, nevadamagazine.com has won two national awards, including a National Headliner Award in 2008. The print magazine received a General Excellence award from the Nevada Press Association in 2009, and the same organization recognized Brown individually with Best Local Column and Best Feature Story awards in 2010.

Brown, whose photographs appear regularly in the magazine and on nevadamagazine.com, started and manages all of Nevada Magazine’s social websites, including Facebook, Twitter, YouTube, and Flickr. He travels the state extensively, researching, photographing, and taking video for upcoming stories.

Before joining Nevada Magazine as associate editor in 2006, Brown worked as the sports and outdoors editor at the Sierra Sun newspaper in Truckee, Calif., and as a sports copy editor and reporter for the Reno Gazette-Journal. He graduated in 2003 from California State University, Chico with a bachelor’s degree in journalism and currently lives in Reno with his wife and 1-year-old son.

Read the FOLIO article about Brown here.
Posted by Nevada Magazine at 11:42 AM