Chance Meeting on the Loneliest Road in America 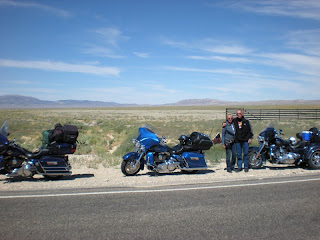 My wife and I have spent the majority of this year participating in a Harley-Davidson Owners Group (HOG) ABC's of Touring game, collecting points for visiting various states, Canadian provinces, cities, counties, various H-D sites, and state HOG rallies. One of our planned rides was from our home in Enid, Oklahoma to the Oregon state HOG rally. Our planned rides are on mostly scenic highways rather than the interstate system. During our travel research we found the Highway 50 Survival Guide, and we included it on our route to Welches, Oregon.

While cruising west on U.S. Highway 50 (the Loneliest Road in America) from Ely to Eureka we were approximately 30 miles east of Eureka when we passed four to five bikers headed east. As is the biker custom, we waved to the passing bikers as we passed each other. About three to four miles later I noticed a single biker pulling up next to me in my rear view mirror.

Thinking the biker was planning to pass me, I waited for the bike to pass. Rather than passing me, the biker pulled up next to me and stayed right on my left shoulder. Looking over to see why the biker had not passed, there is this guy with a huge grin on his face. After a second I recognized a working friend (Terry Johnson) from the Oneok Hydrocarbon plant located in Medford, Oklahoma.

We pulled off the road and talked with Terry for 15 to 20 minutes laughing the whole time. Terry, in a roundabout way, was returning from the Sturgis, South Dakota bike rally. He related that when we passed each other he recognized the color of my bike and with the trike right behind he told his friends that he knew who we were. The friends must have thought he was nuts but he turned around to track us down to say hello. What are the odds of something like that happening?

Terry and his group had left the Sturgis rally and were riding home. Almost 1,500 miles from home we ran into each other on the loneliest section of roadway in America. Can you imagine? The chance meeting has left my wife and me talking and smiling about the chance meeting since. Although Nevada Highway 50 is advertised as the loneliest highway in America it does not mean you can not be surprised and end up meeting a hometown friend while traveling across it. It could happen to you. It happened to my wife and me.
Posted by Nevada Magazine at 4:45 PM