Nevada Magazine’s November/December 2009 issue covers the future of green energy in Nevada, as well as the green building and living trends in the Silver State.

With a climate as conducive to harnessing geothermal, solar, and wind power as any on Earth, Nevada is positioning itself as a leader in the green movement. Companies such as Ormat Technologies (geothermal), Sempra Generation (solar), and Nevada Wind Company are either expanding or planning to incorporate in the state.

Other stories in the issue support the green theme, including how to eat green and reduce your carbon footprint—which in turn promotes healthy eating habits. Other stories focus on green building and LEED certification, including Incline Village’s Tahoe Center for Environmental Sciences, Reno’s Patagonia outlet, and Las Vegas’ Springs Preserve and CityCenter, the new mega resort which opens in December.

Nevada Magazine’s Tour Around Nevada continues in Laughlin, the sixth town recognized in the campaign in which people vote for their favorite rural towns. The top vote getter for a particular two-month period (Nevada Magazine is published every two months) is recognized in a later issue. The stories provide a snapshot of each town’s attractions and history. To vote for your favorite Nevada town (Carson City, Las Vegas, and Reno are excluded), e-mail editor@nevadamagazine.com and include the town and “Tour Around NV” in the subject line.

In other news, the 2010 Nevada Historical Calendar (see image below), produced by Nevada Magazine, is available for purchase. The price is $12.99 plus $3.99 shipping and handling. To order, visit NevadaMagazine.com or contact publisher Janet M. Geary at 775-687-0603 or jmgeary@nevadamagazine.com. There is also a link on the NevadaMagazine.com homepage that allows customers to order a combination one-year subscription to the magazine and 2010 calendar for $22.95. 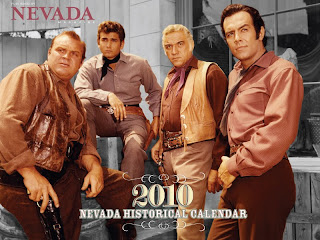 Posted by Nevada Magazine at 9:51 AM