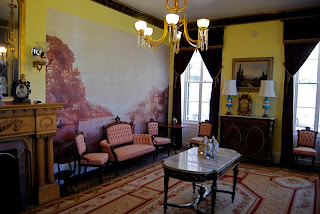 A visit to The Mackay Mansion Museum—or Virginia City in general for that matter—truly is a "Step Back in Time" (which just so happens to be the slogan of the Northern Nevada historic town's Convention and Tourism Authority).

The museum reopened for tours on May 1 of this year, and we were lucky enough to be escorted around the property by the man behind the mansion's renaissance: Octavio A. Cresta. He has leased the mansion through 2014 and has furnished its bedrooms with period pieces from his Uniquities Fine Antiques and Home Decor store out of Incline Village.

A stroll through the mansion is eloquent, rugged, and a little bit of spooky all rolled into one. When you walk into the stylish bedrooms, you get a feel for how absurdly rich John Mackay was. Mackay was the "Boss of the Big Bonanza," which put his net worth at about $100 million in his glory days. He moved into the mansion, originally built as the Gould and Curry mining offices, after his home was destroyed in the city's Great Fire of 1875. The grand room (see photo above) of the Italianate-style house claims the original fireplace and overhanging mirror—the mirror's frame appears to be plated with gold.

The museum also has its share of rustic items, from an old fire-fighting wagon to myriad household items of the day (stoves, sewing machines, laundry soap, etc.). Like many old Nevada buildings, there are rumors of the paranormal at the mansion, too. The most famous story concerns actor Johnny Depp. While filming the movie "Dead Man," Depp stayed in Mackay's former bedroom. He supposedly saw a ghostly apparition in the form of a little girl, who other people have claimed to see in the house.

The mansion is open to the public for tours daily, from 10 a.m. to 6 p.m. Winter hours, which begin around November 1, are to be determined. Private, exclusive tours can be tailored to your needs. Call 775-847-0373 for more information. 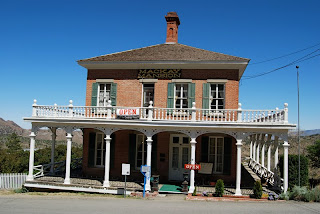