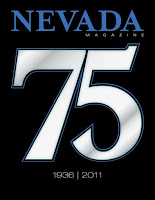 In January 1936, the state highway department introduced Nevada Highways and Parks — known today as Nevada Magazine. Always an information source for Nevada residents and tourists, what started as a black-and-white digest-sized bulletin has grown into a colorful magazine (see past issues here). Today, Nevada Magazine is a division of the Nevada Commission on Tourism, published bimonthly, and based in Carson City and Las Vegas.

In 2011, the state’s official tourism publication celebrates its 75th anniversary. To honor the milestone, the magazine will produce a 192-page special edition, to be printed late this year. “Nevada Magazine is an icon in the West,” says Publisher Janet M. Geary. “Just the other day I was talking to a man in Las Vegas who owns every issue of the magazine. We are excited to celebrate 75 years of Nevada history.”

Subscribers, history buffs, and general Nevada enthusiasts can order the 75th-Anniversary Special Edition now at nevadamagazine.com or by calling 775-687-0603. The special edition will feature re-printed stories from the past eight decades and provide a fascinating historical perspective on Nevada, including the Pony Express, atomic testing, Nevada’s mining legacy, Hoover Dam, wild horses, and more. The collector’s editions are $19.95 each, plus $4 shipping and handling. ORDER HERE 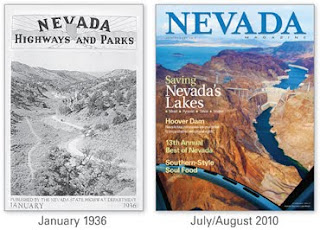 Posted by Nevada Magazine at 9:57 AM