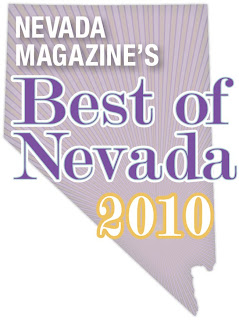 Nevada Magazine’s July/August 2010 issue is available on newsstands throughout Nevada. In the edition, the winners of the 13th Annual Best of Nevada readers’ survey are revealed. From Brewery to Wedding Venue, the anticipated annual listing includes 17 categories.

Readers can also explore some of the Silver State’s unique, fragile environments via a feature on Nevada’s lakes and the environmental challenges facing them and a story about Nevada’s nine National Wildlife Refuges. Desert NWR in southern Nevada and Sheldon NWR in northwestern Nevada are covered extensively.

A story about Nevada tour companies (the cover image, also shown below, features a helicopter view of Hoover Dam) helps travelers plan their next Nevada adventure, and after a day of Nevada sightseeing, nothing hits the spot quite like southern-style soul food, the topic of this issue’s Cravings story. 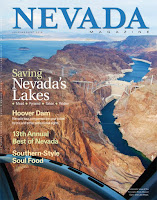 A piece on St. Thomas tells the interesting history of a town that was once submerged by rising Lake Mead. The ghost town is now above water due to prolonged drought in southern Nevada. The Events Spotlight takes readers to the counter-culture festival in the Black Rock Desert, Burning Man, and the People feature spotlights Madeleine Pickens and her nonprofit, Saving America’s Mustangs.

Finally, the magazine’s Tour Around Nevada continues in the historic town of Ely. On July 17, Nevada Magazine will attend Nevada Northern Railway’s celebration of Engine No. 40’s 100th birthday. Visitors to the Ely event can pick up free magazines and other Nevada information, and Nevada Magazine staff will present a plaque and framed story to the town.

In addition to its popular Great Nevada Picture Hunt photo contest, Nevada Magazine is holding its first Writers’ Contest in 2010. Submissions — writers are required to keep their stories at 1,500 words or less — must be received by Monday, August 2 at 5 p.m. (PST). The first-place winner will be published in the November/December 2010 issue.